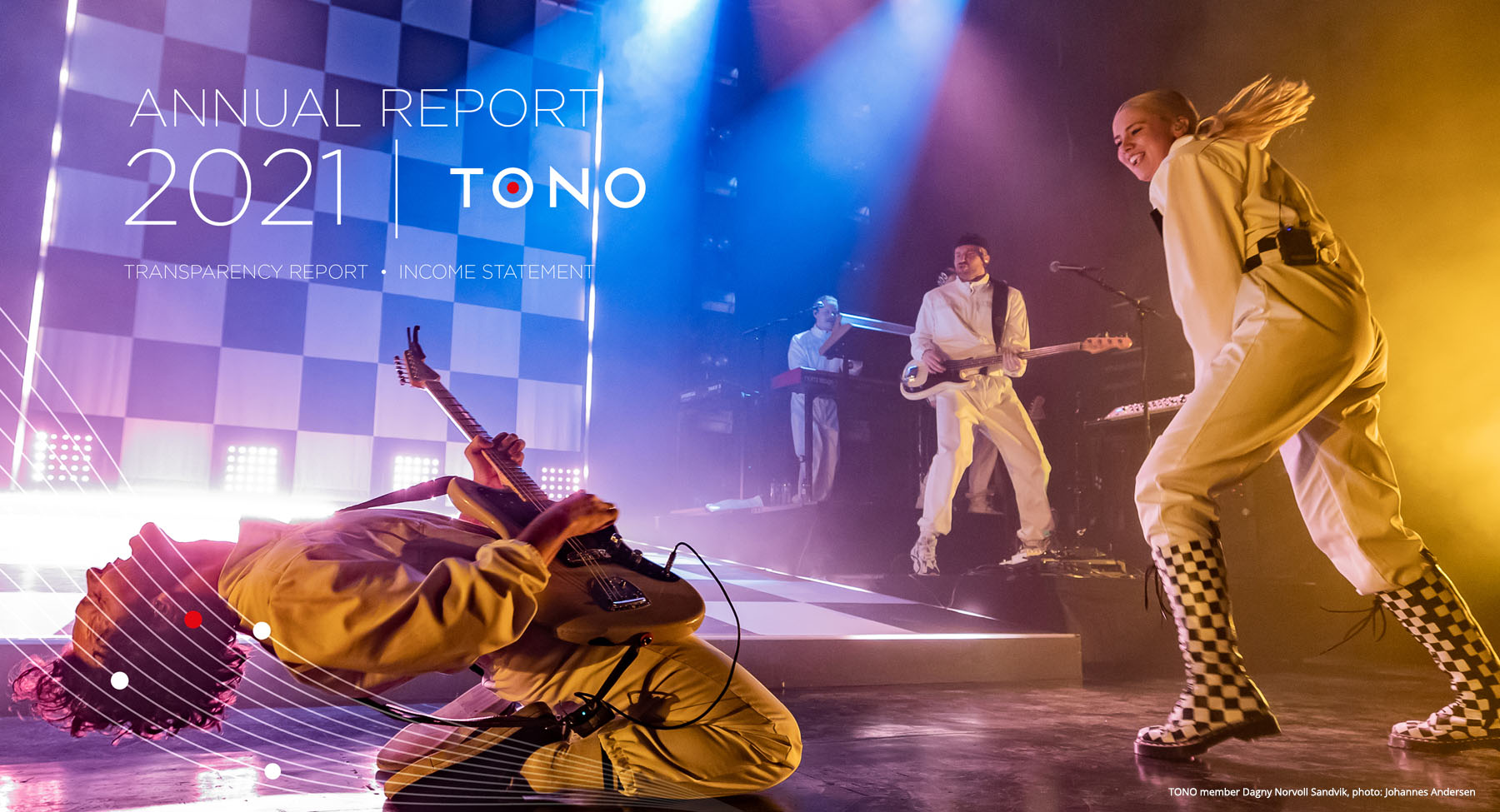 Current status and future development of the business

TONO SA (TONO) is a cooperative society that manages performing and recording rights relating to music. In addition to individual collection contracts with 37,439 rights holders, TONO has reciprocal representation agreements with 76 international sister companies, and thereby also manages their rights in Norwegian territory. TONO has delegated management of its rights holders’ recording rights to the Nordic Copyright Bureau (NCB) in Copenhagen, which is jointly owned by the Nordic collection companies Koda (Denmark), Stim (Sweden), STEF (Iceland), Teosto (Finland) and TONO.

TONO is operated from Oslo. Its office address is Tøyenbekken 21, NO-0134 Oslo, Norway.

In 2021, the board of directors held nine meetings, while board committees held ten meetings.

TONO has purchased directors and officers (D&O) liability insurance pursuant to Section 3-3a of the Norwegian  Accounting Act. Coverage amounts to NOK 5 million.

20 per cent of TONO’s members are women and 80 per cent men.

Music publishers comprise one per cent of TONO’s membership.

The financial statements have been prepared in accordance with the Norwegian Accounting Act of 1998, and comply with prevailing laws, regulations and generally accepted accounting practice. The Accounting Act of 1998 caused material changes in the way pension costs are recognised. As a result, TONO’s recognised equity is negative. The original effect of this was a liability in the amount of NOK -11,026,446. As at 31 December 2021, the total effect of liabilities recognised in equity came to NOK -11,741,423. The year before, the liability totalled NOK -11,807,960.

Since TONO’s distributable income each year amounts to 85–90 per cent of its revenues, and the distributable income is the sum remaining after all costs have been deducted, the board of directors considers that TONO’s financial result for 2021 is good. This is particularly true in light of the fact that Norway was hard hit by the Covid-19 pandemic in 2021, and that the business’s overall financial position is strong.

Continuation as a going concern is therefore without risk. There is a strong likelihood that TONO’s operations will achieve a good result in 2021, although it is expected that part of TONO’s business will be negatively affected by the Covid-19 pandemic.

TONO has at all times a large and liquid cash management portfolio. The objective is to achieve the highest possible return on investment at the lowest possible risk. TONO’s  conservative investment strategy secures stable returns. Each individual investment will be made among those with the lowest risk in their asset class. Risk is further reduced through a broadly composed portfolio, and TONO employs multiple financial services providers to reduce the management risk.

TONO administers ownership of the business’s premises in Sameiet Galleriet through the wholly owned subsidiary Harmoni AS.

Norway was hit hard by the Covid-19 pandemic in 2020. The wide-ranging measures implemented to reduce the spread of the virus severely impacted large portions of Norway’s  business community and, not least, many of TONO’s members. Overall, TONO’s result in 2021 increased substantially – particularly in the online area, including broadcasting.

Within the individual business areas, we have seen a Covidrelated decrease in income particularly in the cinema, concert and variety sectors, but also to some extent in the area of background music, which covers hotels, restaurants, cafés, etc. We also noted a decrease in the distribution of television broadcasts.

The losses experienced in the above-mentioned areas were considerable. However, their impact was cushioned by a significant increase in revenue in the online and broadcasting areas. This was driven in particular by the growth of film streaming services.

Throughout 2021, TONO engaged in a constructive dilogue with the Norwegian Ministry of Culture with respect to compensation for losses incurred by TONO’s members as a result of the national lockdown.

This resulted in an application for state aid by TONO. On 20 March this year, the Ministry of Culture notified TONO that it would grant NOK 34 million in state aid to TONO’s members, for distribution via TONO. The ministry will set out the principles for allocating this aid in a letter which, as at 21 March, TONO had not yet received.

TONO’s members will be notified via TONO’s website and in an e-mail of how and when the distribution of funds will take place.

The trend towards direct licensing in the online area continues internationally. In the same way as many of TONO’s sister societies license their repertoires directly to streaming  sevices without TONO’s help, TONO also licenses its repertoire directly to the major music streaming services in conjunction with TONO’s sister societies Koda, Teosto and STEF, through the company Polaris Hub AB. TONO does not expect any changes in its rights portfolio in the current year.

NCB is an independent legal entity, which is led by a board elected by Koda, Teosto, Stim, STEF and TONO. NCB’s operations are performed by Koda. This has proved to be an efficient solution for NCB as an organisation, as well as its owners.

NCB’s operations in 2021 made a profit of DKK 8.522 million, compared with DKK 5.8 million in 2020. This has been transferred to equity, which totalled DKK 57.222 million as at 31 December 2021. Overall phonogram sales are declining in line with increasing use of digital services, and NCB has adapted to the market situation, with a considerably reduced turnover.

It is TONO’s ambition that there shall be full equality between men and women. This means that there will be no difference in the way men and women are treated with respect to such factors as salary, promotion and recruitment. TONO’s workforce comprises 35 women and 30 men. Two men and one woman are employed on a part-time basis. The average age of the entire workforce is 47 (46.0 years for women and 47.5 years for men).

The organisation’s HSE activities are systematised through the Works Committee (AMU). The Works Committee holds regular meetings. Efforts relating to sickness absence shall be discussed at a minimum of two meetings per year.

TONO has had its own Inclusive Working Life (IA) agreement with the Norwegian Labour and Welfare Administration (NAV) for many years. The IA Agreement’s main objective was to foster the inclusion of everyone who is willing and able to work, either full time or part time. With effect from 2019, the IA Agreement has been extended to cover the entire  labour market and is therefore no longer entered into with the individual enterprise.

In 2021, the sickness absence rate totalled 3.07 per cent, compared with 2.23 per cent the year before. Sickness absence is followed up in accordance with the IA Agreement and the provisions of the Norwegian Working Environment Act. TONO does not engage in business activities that can pollute the external environment.

The employer’s duty to promote equality and prevent discrimination

TONO’s Code of Conduct, which all its employees have signed, contains the following provisions:

“TONO shall be a workplace with an inclusive working  environment. Employees shall treat each other and those with whom they come into contact through their work with respect and integrity. TONO shall facilitate a working  environment free from discrimination on the grounds of religion, skin colour, gender, sexual orientation, age, nationality or ethnic origin, or disability. TONO’s employees shall also contribute to a working environment free from bullying, abuse, harassment, etc. TONO will not tolerate any behaviour that may be perceived as degrading or threatening.”

Over time, it has been TONO’s goal to achieve a near equal distribution in the number of men and women in its workforce. As at 31 December 2021, women made up 51 per cent of its employees, while men made up 49 per cent. Men and women in comparable jobs receive the same salary.

Three employees work part time at their own request, partly due to the need to provide care at home and partly due to reduced capacity for work.

Welfare and care leave is divided equally between the sexes, but there is a higher level of sickness absence among the women than the men.

TONO pays attention to the issue of equality, and the statistics show that the Gender Equality Act’s requirements have been met.

TONO abides by the provisions of the Norwegian Cooperative Societies Act with respect to board representation. These require that both genders shall have at least 40 per cent representation on TONO’s board of directors.

TONO’s 65 employees are an ethnically diverse group. We have employees from all the Scandinavian countries, from elsewhere in Europe, as well as Africa, Asia and the USA.

We are therefore of the opinion that TONO promotes equality in accordance with the purpose of the Act. 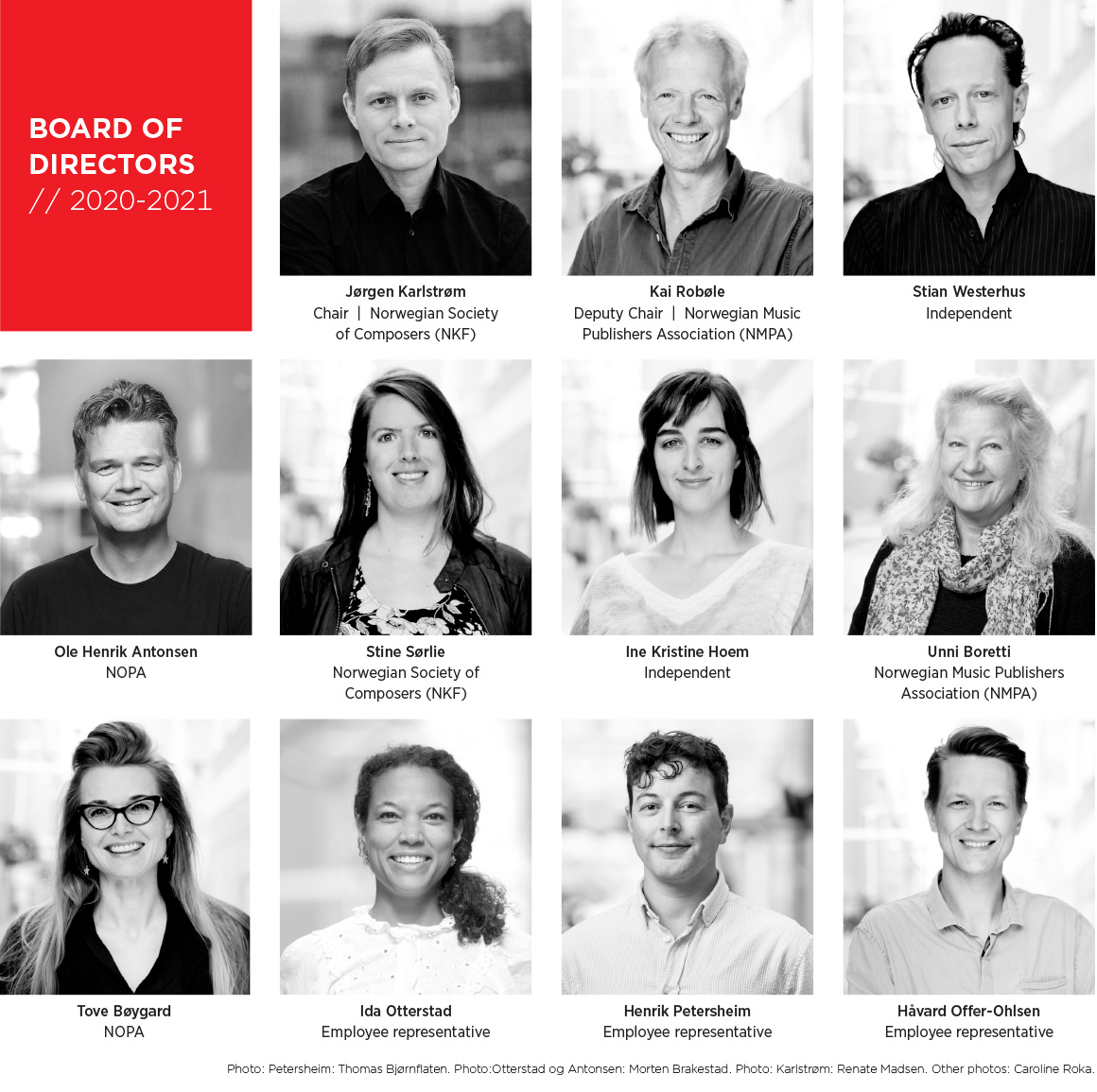 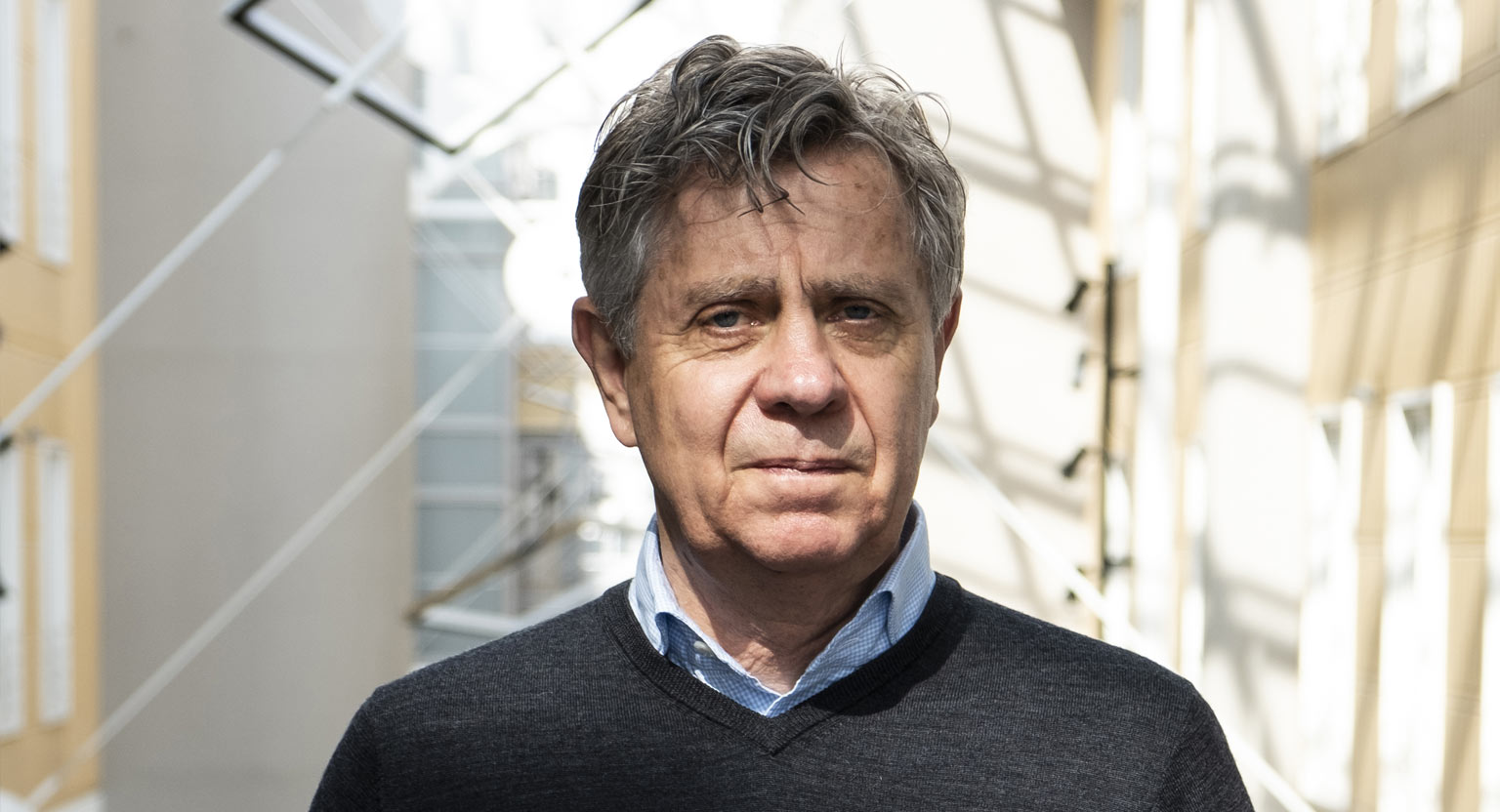 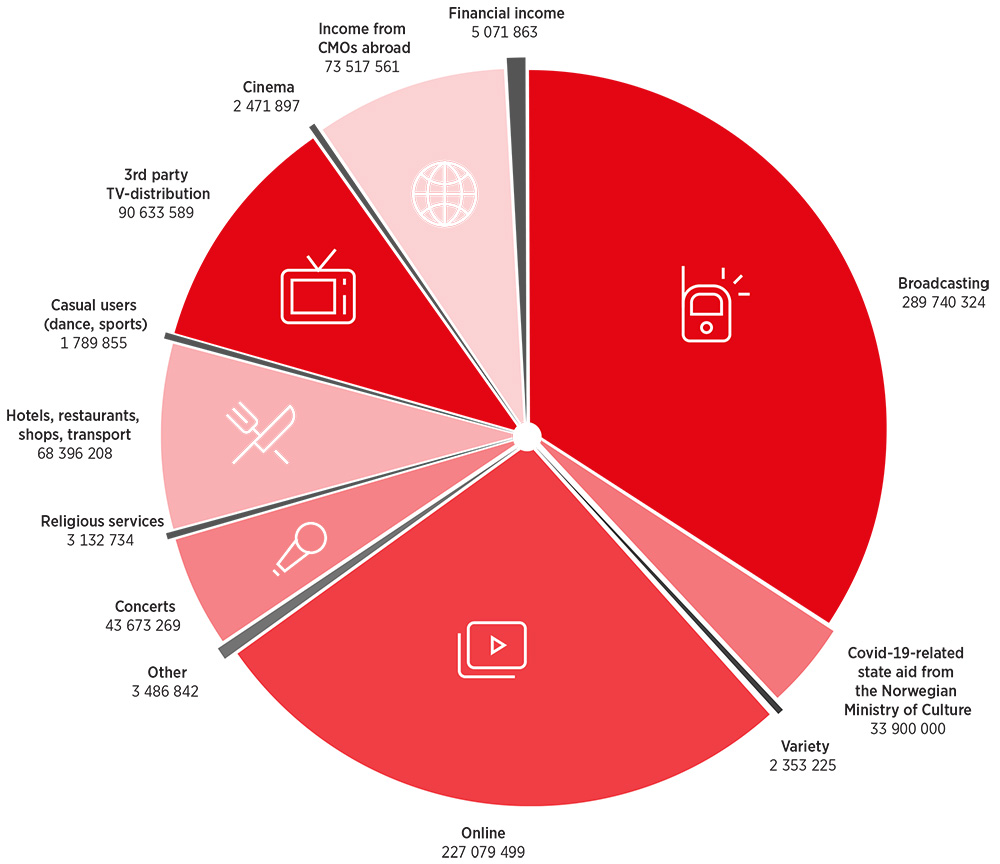