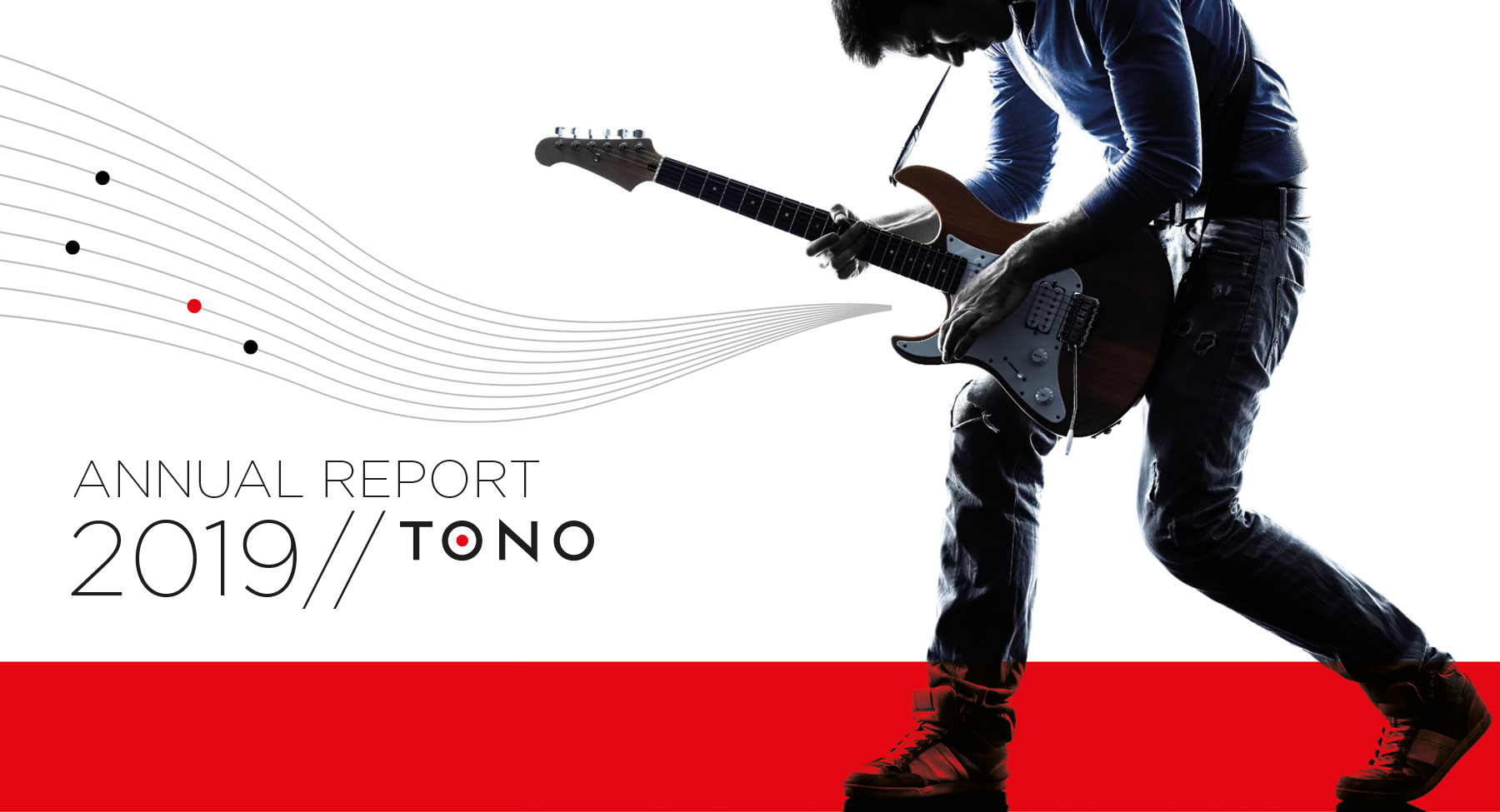 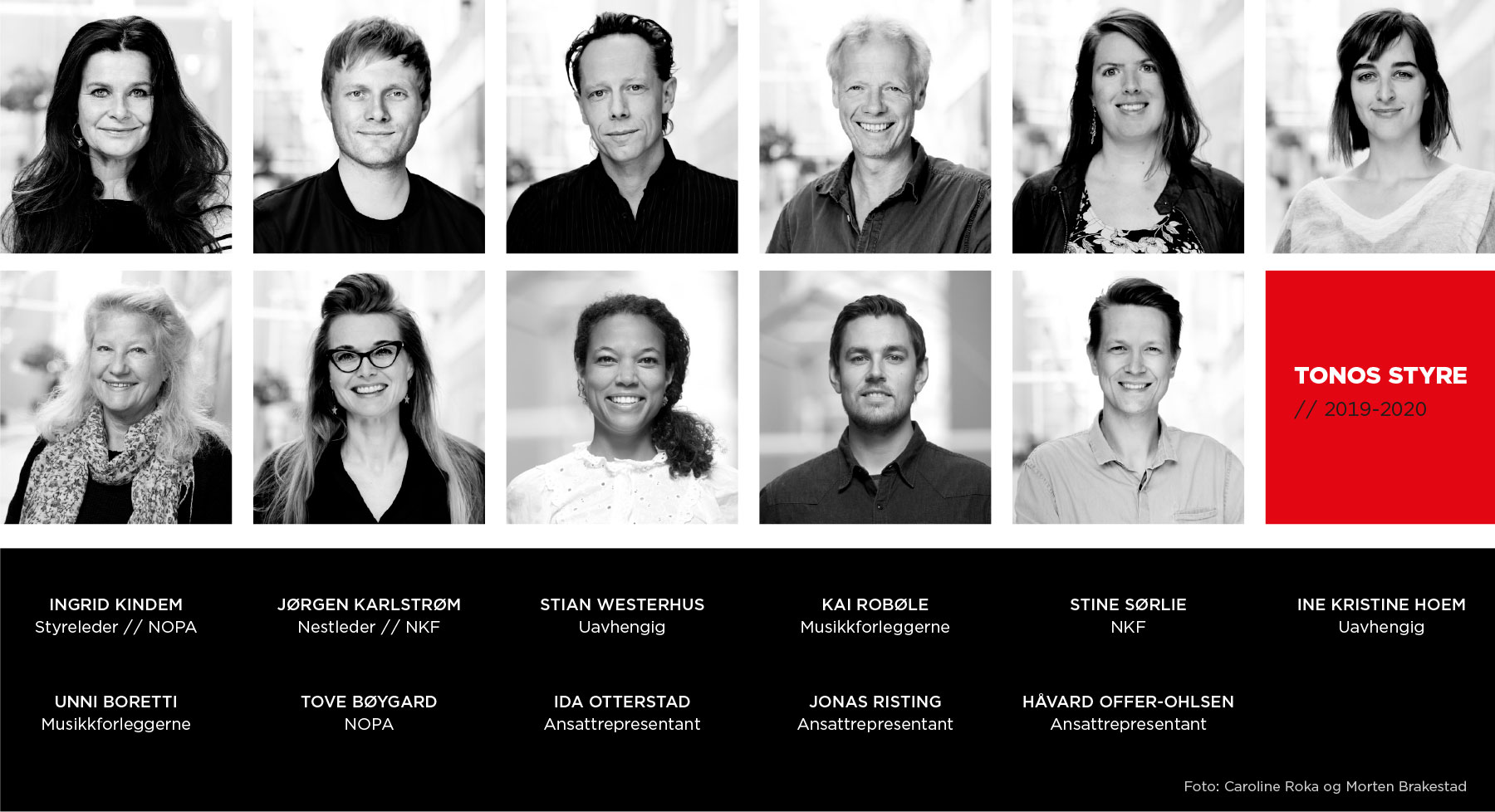 In 2019, nine Board meetings and four Board Committee meetings were held.

The gender breakdown among the members is 20 per cent female and 80 per cent male.

Music publishers account for 1 per cent of the membership.

TONO’s accounts have been prepared in accordance with the requirements set out in the Norwegian Accounting Act of 1998 and are in compliance with the requirements laid down in current legislation, regulations and generally accepted Norwegian accounting practices. The Norwegian Accounting Act of 1998 entailed major changes in the recognition of pension costs in 1999. As a result of this, TONO recognises negative equity. Originally, this effect was minus NOK 11 026 446. At 31 December 2019, the total effect of liabilities charged against equity was NOK 11 387 128. The year before, this obligation amounted to NOK 11 533 193.

Inasmuch as TONO’s net income for distribution accounts for 85 to 90 per cent of its revenues each year, as well as the fact that the net income for distribution is at all times what is left after all expenses have been deducted, it is the Board’s opinion that TONO’s financial results for 2019 are good, and that the organisation’s financial position is strong. It is thereby a going concern, entailing no risk. There are good prospects to indicate that TONO’s activities will achieve a good result in 2020.

TONO has a comprehensive portfolio under management at all times. The goal is to obtain the highest possible return with the lowest possible risk. TONO’s conservative investment strategy ensures stable investment performance. The individual investments are to be among those with the lowest risk in their asset class. The risk is reduced further by having a well-diversified portfolio, and TONO patronises several financial service providers in an effort to reduce management risk.

TONO manages its ownership of the organisation’s premises in the Sameiet Gallery through its wholly-owned subsidiary Harmoni AS.

Market trends
We see that the largest market areas are developing very well, with concerts, film streaming/VOD and TV distribution as the areas with the strongest growth. The tendency to compete for customers in the background music segment has grown keener as providers of non-licensed music are becoming somewhat more active.

In autumn 2018, a long-standing disagreement between RiksTV and TONO was decided by the Supreme Court. After TONO had won in both the District Court and the Court of Appeal, the Supreme Court handed down a unanimous judgment that fell squarely in favour of TONO. In keeping with the judgment, TONO has filed a significant claim for damages against RiksTV. On 23 December 2019, the parties settled the damages suit for MNOK 100.5.

There were no special circumstances in 2019 that had any significant impact on TONO’s activities.

The COVID-19 situation – events occurring in 2020 prior to submission of the Directors’ Report, which will have an impact on TONO’s position
The serious situation created by the COVID-19 virus the world over will impact TONO’s operations in 2020.  As of 24 March 2020, it is not possible to conjecture about the consequences with any degree of certainty.

No particular changes are expected in TONO’s rights management portfolio in 2020.

After instituting various measures to limit the spread of the virus, TONO has stable access to staff working from their home offices, and duties are being carried out almost as usual. We will nevertheless be facing a significant decline in revenues in 2020, which will increase in direct proportion to the length of the coronavirus situation.

NCB
NCB is an independent legal unit managed by a Board elected by KODA, TEOSTO, STIM STEF and TONO. NCB’s day-to-day operations are handled by KODA. This has proven an expedient solution for the NCB organisation and its owners.

NCB’s operations reported a surplus of DKK 4 667 000 in 2019. This amount has been transferred to equity which, at 31 December 2019, came to DKK 42 852 000. The sale of phonograms is declining continuously, and NCB has adapted to the market situation, with substantial reductions in revenues.

TONO’s goal is full equality between female and male employees. This means we try to ensure there is no gender-based discrimination in respect of salaries, career advancement opportunities or recruitment.  There are 33 women and 27 men on TONO’s staff. Two men and one woman are employed in part-time positions. The average age of all staff members is 45.8 years (45.5 for women and 47.8 for men).

Internal control, HSE (health, safety and the environment)
Thanks to the Working Environment Committee (WEC), comprised of representatives from the employees’ trade unions and management, TONO’s HSE work has been systematised. WEC meetings are held on a regular basis. At least two meetings each year have sickness absence on the agenda.

For many years, TONO has had an IA (Inclusive Working Life) agreement, a cooperation agreement between an individual company and the Norwegian Labour and Welfare Administration (NAV). The primary goal of the agreement was to accommodate everyone who can and wants to work, be it full time or part time.  As from 2019, the Inclusive Working Life agreement applies universally in Norway and is no longer based on agreements with individual businesses.

In 2019, sickness absence was 4.44 per cent, compared with 5.77 per cent the year before.  Sickness absence is followed up in accordance with the Inclusive Working Life agreement and the provisions of the Working Environment Act.

TONO does not engage in activities that can pollute the outdoor environment.

Employer responsibility for promoting gender equality and preventing discrimination
Over time, one of TONO’s goals has been to ensure an almost equal distribution of women and men on staff.  At 31 December 2019, the staff consisted of 55% female employees and 45% male employees. Women and men in comparable positions are paid the same.

Compassionate leaves and leaves to provide family care are equally divided between men and women, but there is more sickness absence among women than among men.

TONO devotes attention to gender equality, and the statistics show that TONO is in compliance with the provisions of the Gender Equality Act.

TONO’s Articles of Association include an article stating that each gender is to have at least 40 per cent of the seats on TONO’s Board of Directors.

TONO’s 60 employees come from a broad range of ethnic backgrounds. We have co-workers from all the Scandinavian countries and the rest of Europe, as well as from Africa, Asia and the USA.

We would therefore maintain that TONO promotes equal opportunity in keeping with the purpose of the Act. 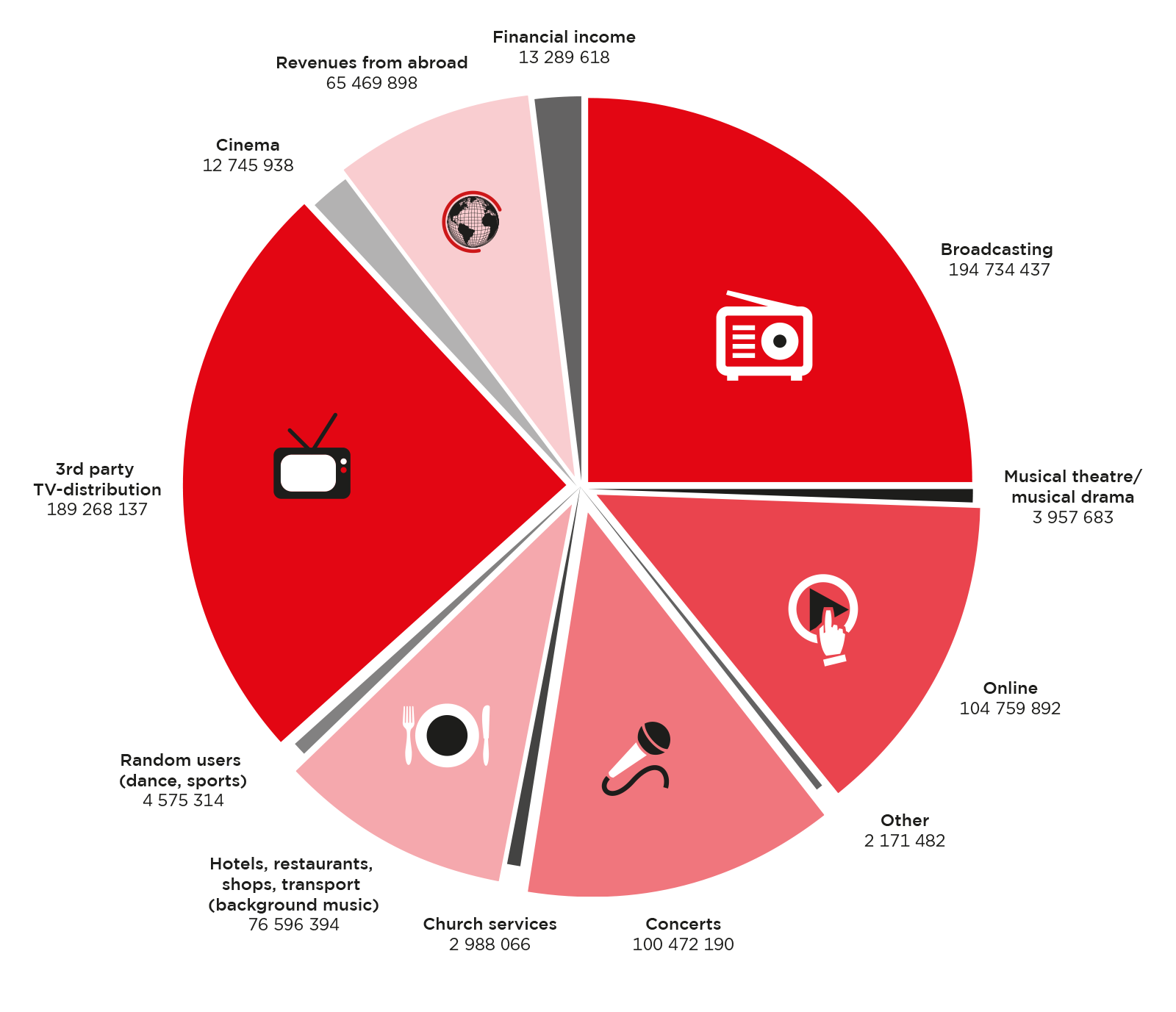